Editor's note: The following report
from the "Rooter's" news agency
(aka Syd Baumel) is obviously a work of fiction,
but it's also a vision of possibilities.

NEW YORK (Rooters) - At a press conference today at the United Nations on the second anniversary of the tragic events of September 11, 2001, a diverse coalition of world leaders, celebrities, Nobel Laureates, and non-governmental organizations called for "a just and democratic new world order." 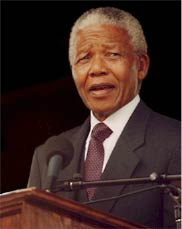 The ambitious plan, spelled out in a 347-page document titled "One World: A Plan for Just & Democratic Global Governance," was endorsed at the conference by a who's who of  political, religious, cultural, scientific, and corporate leaders that included statesmen Nelson Mandela, Jimmy Carter, and Mikhail Gorbachev, religious leaders Pope John Paul II, the Archbishop of Canterbury George Carey, and His Holiness the Dalai Lama, entertainers Jessica Lange, George Clooney, Susan Sarandon, and Martin Sheen, and NGOs Amnesty International, Oxfam, and Doctors Without Borders.

"We are living in a global village that is victimized daily by war and the constant threat of war and by an international state that borders on anarchy. Like the founding fathers of the United States of America, we must create `a United States of the world,' with a twenty-first century constitution to safeguard the planet and all its creatures," said veteran broadcaster and world federalist, Walter Cronkite.

"The greatest hope for a solution to humanity's gravest problems - war and terrorism, poverty, tyranny, the destruction of the environment - lies in the creation of a democratic world government," said the Pope by satellite from the Vatican.

The document, co-authored by 32 prominent experts on government, international law, defense, economics, the environment, and related subjects is a joint project of nearly two hundred NGOs coordinated by the World Federalist Movement (WFM), which has long advocated a federation of the world's nations with phased disarmament at the national level and the creation of a strong global peacekeeping force.

Anderson argued that the world is caught between anarchy ("a global wild west"), undemocratic domination by the world's current superpower, the United States, and potential superpowers-to-be, like China, mayhem by terrorists and armed rogue states, and the "unchecked influence of mighty transnational corporations" and "economic globalization without the political globalization of our most fundamental human values."

"None of us would tolerate such chaos in our own countries," Anderson said. "So why do we tolerate it on the world scale? We must move without delay to convert the United Nations into a true federation of the world's countries with the power to democratically, constitutionally, and representatively legislate and govern at the global level." 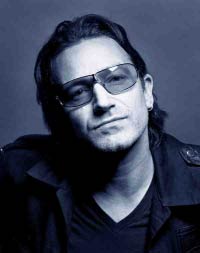 In addition to the "One World" document (available in print and soon online in 62 languages at www.worldgov.org), the WFM-led coalition is launching a campaign "to make the issue of just and democratic global governance and its allied concept of world citizenship a staple of `the conversation' - in TV and radio studios, living rooms and board rooms,  town halls and concert halls around the world," said former WFM President, the British actor, writer, and human rights activist Peter Ustinov. "Oh yes, and I mustn't forget 'chat rooms,'" the Goodwill Ambassador for UNICEF added. "Every day, something happens in the world - or fails to happen - that should be the province of an enlightened world government, and our Campaign for Just and Democratic Global Governance [CJDGG] will miss no opportunity to point that out to the increasingly self-conscious world citizenry, which some have recently dubbed 'the Superpower of Peace,'" Ustinov said. "We shall henceforth take on the role of loyal opposition to the current, unelected world administration," Ustinov added. "Our goal is to replace the current coalition of the willing with a coalition of the willing and able to speak and do right for all the world's peoples, not a select few."

Ustinov announced that the CJDGG will be producing global citizenship programming - including talk shows, newsmagazines, and documentaries - for TV, radio, and the Internet, organizing "global town halls" at real and virtual (online) locations, and producing curricula on global citizenship and related issues for schools and universities.

"Global democratic and constitutional self-governance should be one of the ABCs of citizenship, from childhood on," added media magnate Ted Turner, who will be spearheading the broadcast campaign. In 1997, Turner pledged $1 billion to the UN which he is paying in ten annual installments.

"We believe that when people understand the pros and cons of a world without just, democratic governance and a world with it, they will vote overwhelmingly for global self-determination over global anarchy or quasi-dictatorship," Anderson said.

"World government is not only possible, it is inevitable," added Ustinov, "and when it comes, it will appeal to patriotism in its truest sense, the patriotism of men and women who love their national heritages so deeply that they wish to preserve them in safety for the common good."

To help launch the campaign, a Concert for One World will be held on Saturday, September 13, at 24 far-flung locations. "We have over 300 artists and groups who'll be performing as far afield as Central Park in New York City and a huge stadium in Doha, Qatar," said concert coordinator Peter Gabriel. The concert, which will be broadcast live in most countries and on the Internet, will feature such stars as Paul McCartney, U2, Miriam Makeba, Luciano Pavarotti, Joan Baez, and Youssou N'Dour, and speaking appearances by Nelson Mandela and Desmund Tutu at the concert in Johannesburg and Jimmy Carter and Kofi Annan at the concert in Central Park.

Reprinted with the permission of Syd Baumel.